"reviving the spirit of "art of healing"in an era of misery." > News 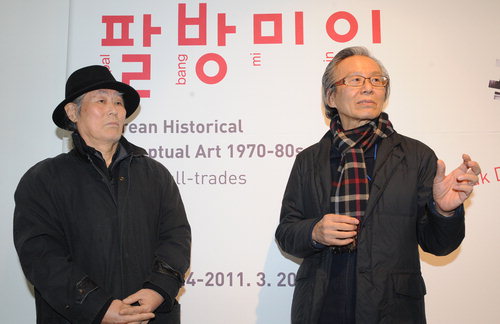 The 1970s and 80s were a turbulent period in Korean society. Since it was a painful time, he was also determined to heal the wounds.

The works that writers made at that time were another Korean. The crisis and pain of this land, which the writers have helped, have shone in conceptual art such as performance, installation, and video work.

The Gyeonggi Museum of Art's collection, which was collected after its opening in 2006, is showing works by artists who promoted and developed conceptual art (the genre that defines the idea or process of production rather than the completed work itself) in the 70s and 80s. It's a "all-round beauty" game.

The Gyeonggi Museum of Art has restored Lee's 75-year-old "Today's Method Exhibition" and performance videos through collecting their materials and visiting the studio. Hong Myung-seop's video footage of the 80s exhibition hall and his lost work were also recreated. In addition, the exhibition features Kim Yong-ik's Winter of Shinchon, Lee Gang-so's early works, Kim Goo-rim's archives, and a performance scenario that he wrote for 20 years.

Kim Gurim and Lee Geon-yong, one of the most famous artists in Korea, met at the Gyeonggi Art Museum on Sunday afternoon.

Kim Gurim (Kim) = I've been a senior junior for 40 years, but I've never met alone like today. I think it was yesterday that we discussed Lee's sketches at a gathering held at my house in Dongbu Ichon-dong, Seoul in 1971. 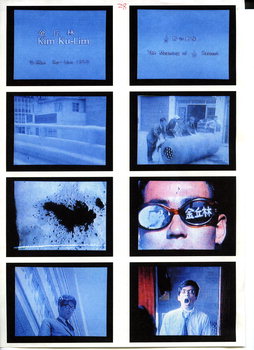 Kim Gurim wrote, "The meaning of one-fourth of a second" (partial).

Lee Kun-yong: In the late '60s, when the concept of modern art was not even established on this land, Kim was a teacher to young writers. Please join us in AG (Korea Avant-garde) group. He was busy with overseas activities such as Japan and the U.S., but he didn't give us any advice when he was in Korea You are a living witness to modern Korean art.

Kim: I didn't know Lee's father was a pastor and he would be performing art in the light of the atmosphere in the house. In the early 70s, Lee was the first Korean to show various forms of drawing, installation, performance and discussion through conceptual art. In addition, through "Event," a genre of performing art at that time, we secured the logical condition of artistic action.

This = I wanted to say a word to the custom at the time when materialism overwhelmed spiritual values and belittled human life. Mr. Kim showed his art by burning Ttukseom grass in 70 when no one thought of conceptual art. He was all over the place, from directing movies and plays to composing. I respect the loneliness and sadness of my teacher, who was a pioneer.

Kim: I was very disappointed by the flower beds at the time, regardless of whether they were popular or not. After forming the Fourth Group in 1970, I wanted to develop Korean art by bringing together young artists working in art, religion, literature, theater, film and music, but the flower beds only looked at me in a cold light. On August 15 of that year, after finishing the 4th group organizing competition at Sajik Park, he carried a coffin and tried to march down the street to the Han River. I mean, let's get the culture out of business. But a detective waiting for us at the police station at the entrance to Deoksugung Palace caught us for a traffic violation, dragged us to Namdaemun Police Station and interrogated us. The meaning of the fourth group was questioned all night, asking why they called the chairman Tongyeong and vice president Chongyeong, and where did they get the money? The next day, the reporters helped solve the problem, but the detectives kept an eye on me until the fourth group was disbanded. Finally, I went to Japan to study modern art, and when I came back to Korea in 75, I found out. You've been tortured, haven't you? 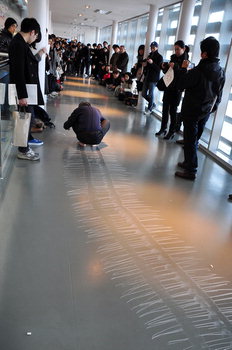 This was when the National Museum of Contemporary Art in Gyeongbok Palace displayed the body port in 1971. We have to carry the soil and plant trees, but if it rains, we'll have car ruts, so we'll dig the dirt in the garden by one meter, one meter across and one meter high. I wrote a memorandum. However, the reason why he dug a hole in the museum next to Cheong Wa Dae is to bury the explosives. They say I'm a communist. I couldn't believe it even if it wasn't. Since then, two detectives have been following me. When I was an art teacher at Gwangseong Middle and High School in 1975, I performed two performances including "Do you see me?" and they said that I criticized the system. Two months later, he was dragged to the eyeball and put his ankle on two calves and his thighs were trampled violently with his knees crossed. I've been suffering from the aftermath of torture. I just drew a straight line on the canvas, and they asked me why I drew a straight line. After he became a professor at Kunsan University in 1981, his surveillance continued and when he finished his training as a professor of mask dance at Gunsan University, the detectives disappeared.

This = I'm flattered. The only thing you've done is Mr. Kim has been working on it for 40 years. I took out all my belongings and connected them with them, and I performed more than 80 performances, including a nude "life," "eating a bun," "walking a slug," and so on, but you're a master artist who doesn't mean "draw." Among the exhibits, 24th of a second (which refers to the format in which 24 films are played every second) was well received at the Taiwan International Experimental Film Festival last November, right? This time, I was able to recreate the "body harbor" in which I donated trees from Paris National Park to Paris in 1973.

Kim = I got 'feel' from the installation art of time, and I made a new product out of it, and I took a lot of time back to the past to look back at the "future-oriented present." In the case of performance, I put the batter as the main player rather than the main player. The bridge in front of Shinsegae Department Store was filled with balloons, so passers-by can cross the bridge only when they hit the balloon, and the time taken in an envelope containing medicine was written down and taken. Of course, they were healthy drugs (laughs). My work has changed with the times. I don't know what I'm going to do. I directed Oh Tae-seok's play "Wedding Dresses," modern dance, fashion show, and in 1969, I conducted the first International Contemporary Music Festival. This is the first time I've heard that there's an eight-millimeter film that stopped filming a woman's nude. I also want to restore it. We're also going to release a follow-up to "Panghwa Collection."

This = When I finished 2010 on the 27th, I had two performances in Busan: "Life Successed" and "Slip Walking." In March, we will participate in the Korean Contemporary Art Exhibition in New York as a performance and body drawing, and we will have about 10 exhibitions per year. We'll see you in good shape throughout 2011.

The dialogue between the two artists continued until night was the history of modern Korean art itself. Among the words, "Dong Ji-yai," who spent 40 years with him, was buried. The exhibition "All-round Beauty" runs through March 20. (031)481-7033